Solstice Party with a spot of Cosmiques Icefall Climbing... 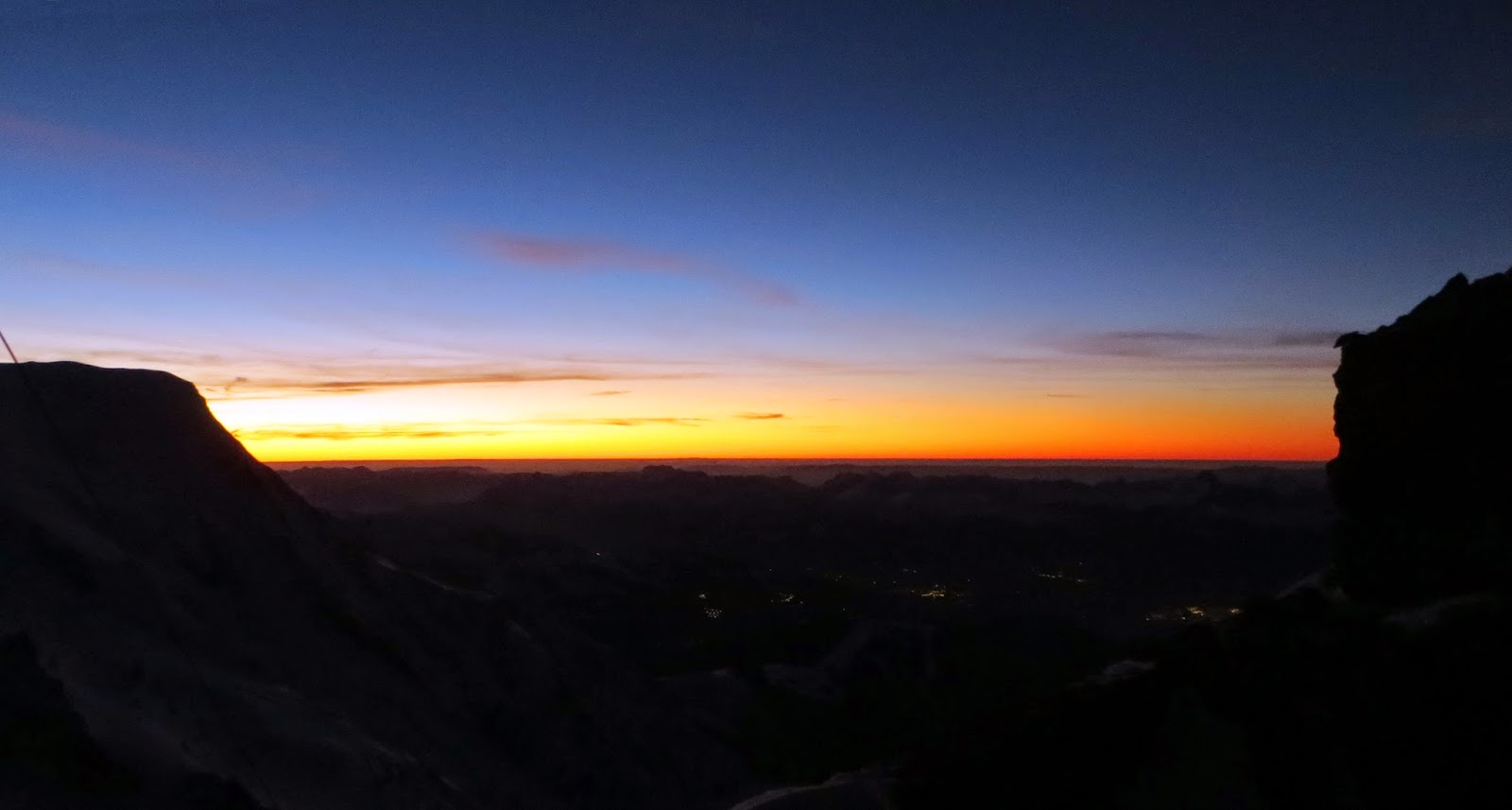 Life happened... This blog post has just been sitting on my computer since before Christmas. Since then I've been mainly working... Making more beds than I can remember in nearly 60 different flats combined with a dose of self-inflicted food poisoning and Cham-plague all took it's toll on me actually finishing this post. But here it is at last! Pat and Hannah can now see some photos from the trip too! 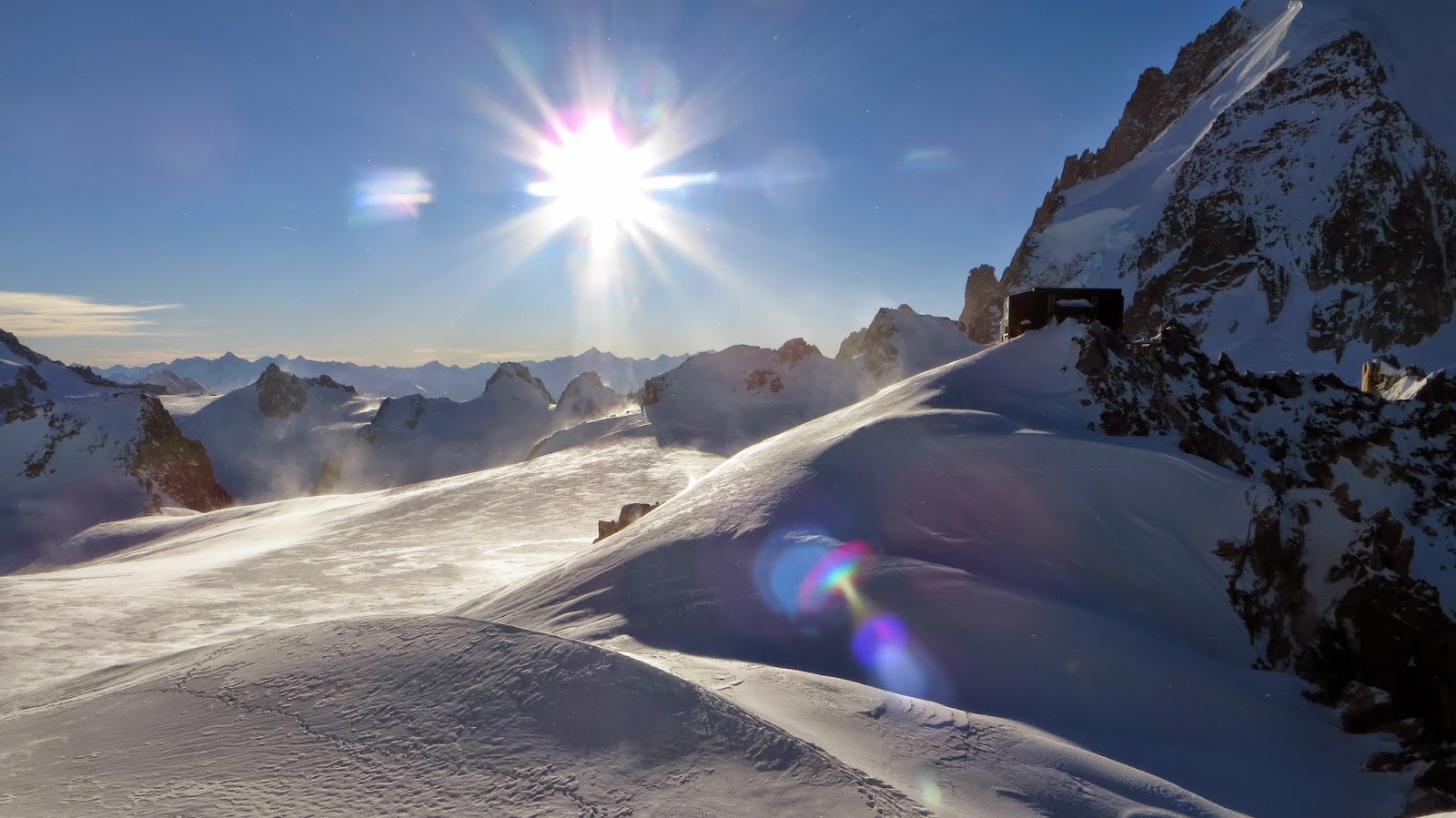 What better way than to spend the longest night of the year than in a high mountain, freezing cold, unmanned alpine hut?! Settling down to 12 hours of potential sleep is always a satisfying prospect, especially when your alpine climbing alarm won’t be in the middle of the night. Arriving in the Abri Simond, with my skis, as the sun set was pretty magical. Though my arrival was probably more magical for Pat and Hannah. As I had failed to answer my phone on the ski down, they decided that I (and the stove/dinner) hadn't made it up so ate all their hill food for the next day. A couple of benighted alpinists also joined our hut party and were glad of the extra food and a couple of litres of water we dontaed to them. Quite the exciting solstice party! 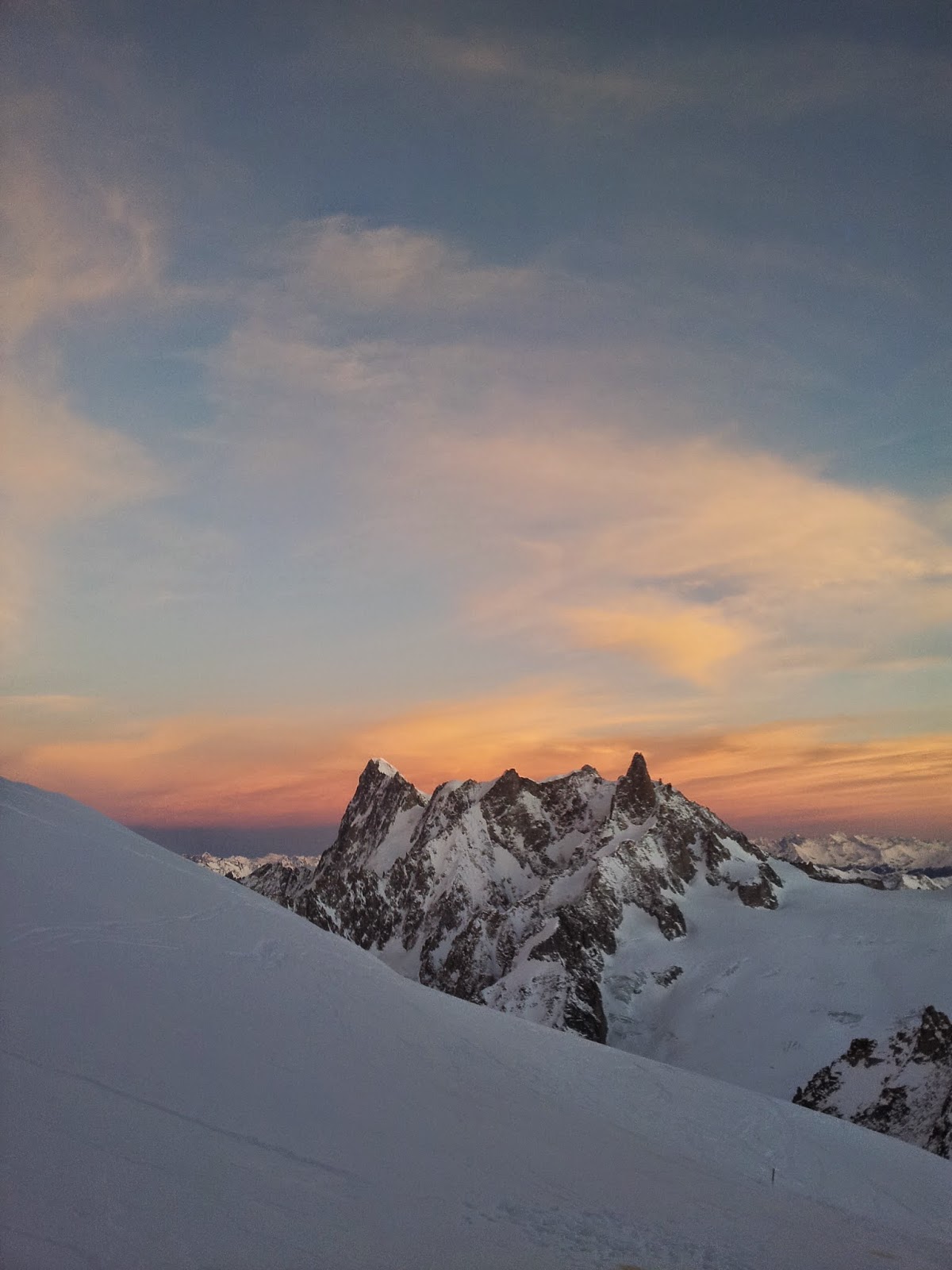 With Pat’s snowshoe needing some fixing we decided not to climb on Point Lachenal but to do something closer to the lift. The Cosmiques Icefall looked in fairly good condition (said Pat, I forgot to look into it) and is about 200m from the hut so became a very appealing alternative! Although I’d done most of the route a couple of seasons ago the crux hadn’t be in condition so I was happy to have another go. 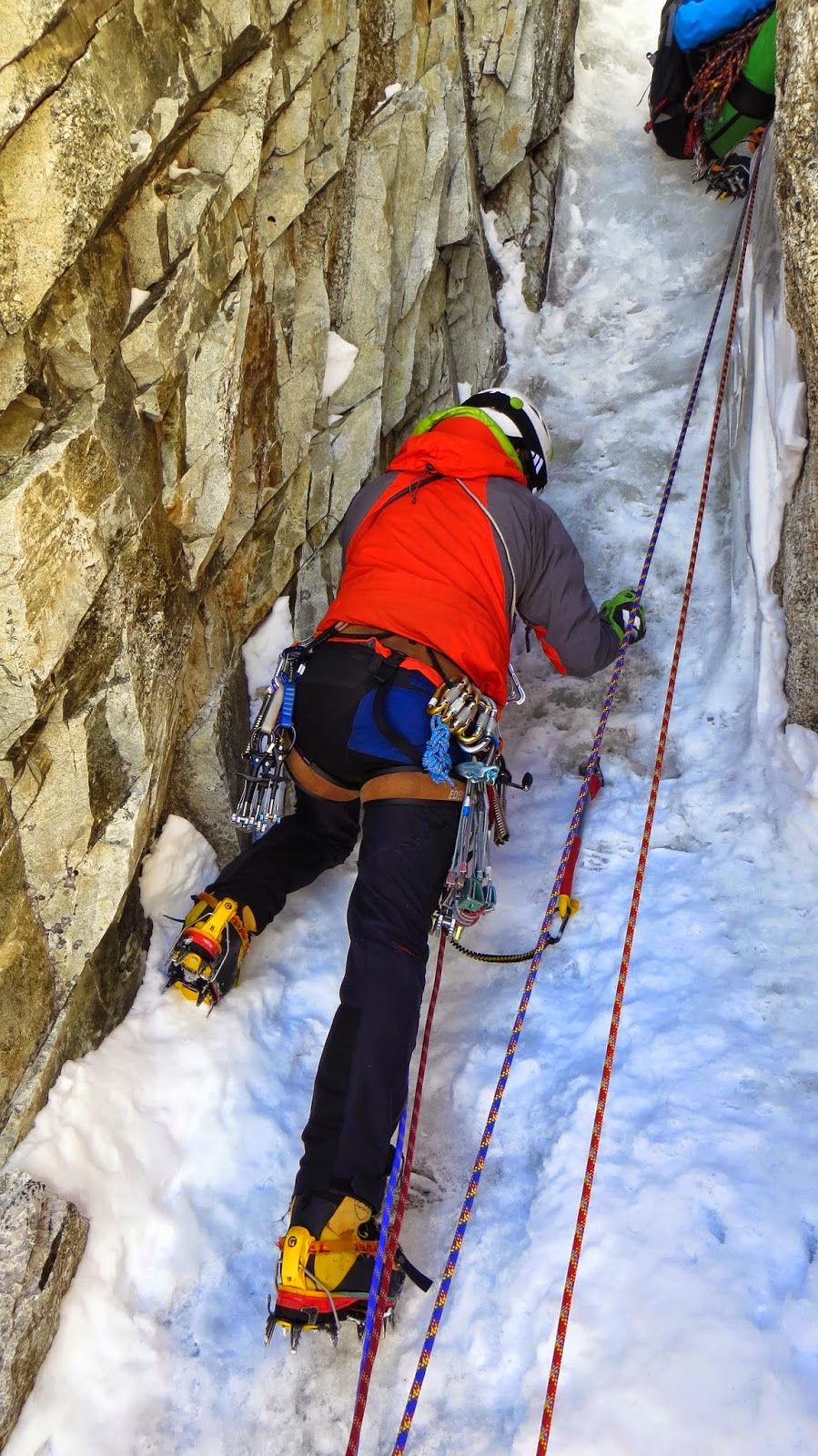 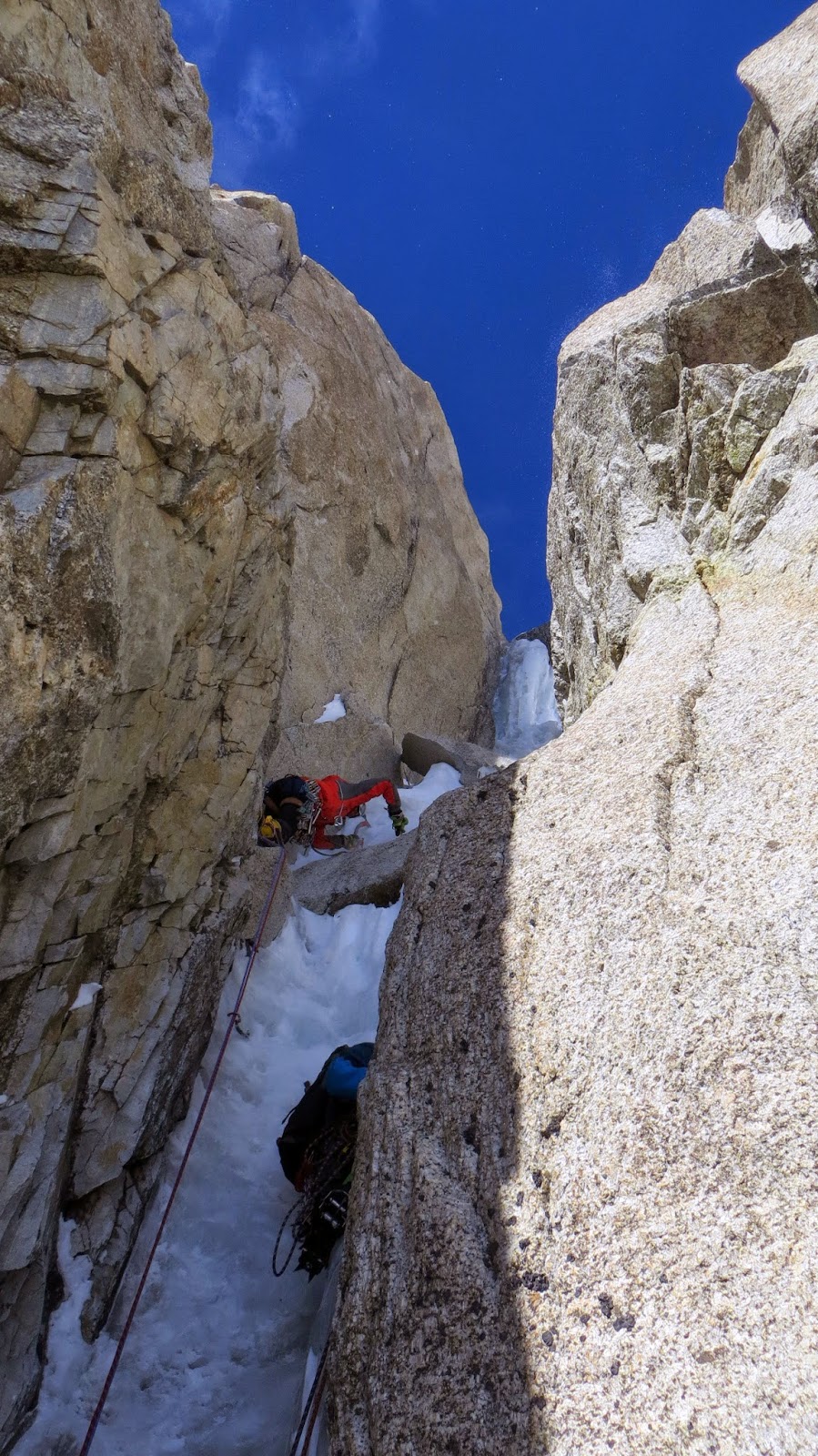 For our team, the route and crux pitch were in pretty good condition. For the party of three directly beneath us it wasn't so good. We knocked a significant amount of ice down on them, including the thin bit of the crux pitch... As we had caused them so much grief we decided to wait for them to finish the final crux pitch rather than abseiling onto their heads. Good job we did as there was so little ice left we had to chuck the following party a top rope, oops!
As I had smuggly skied down to both the hut and bottom of the route (Hannah and Pat were snowshoeing) I knew the final return bootpack up to the lift was going to be pretty brutal... And it was! As the other two had long overtaken me and disappeared, I just had to get my head down and hope the gusty wind didn't catch my sail-like skis. Still I made it and blagged my way to the front of the lift queue, win! Getting home and weighing my pack (18kg...) I came to the conclusion that I need some lighter approach skis, because lighter kit is much easier than getting fitter! 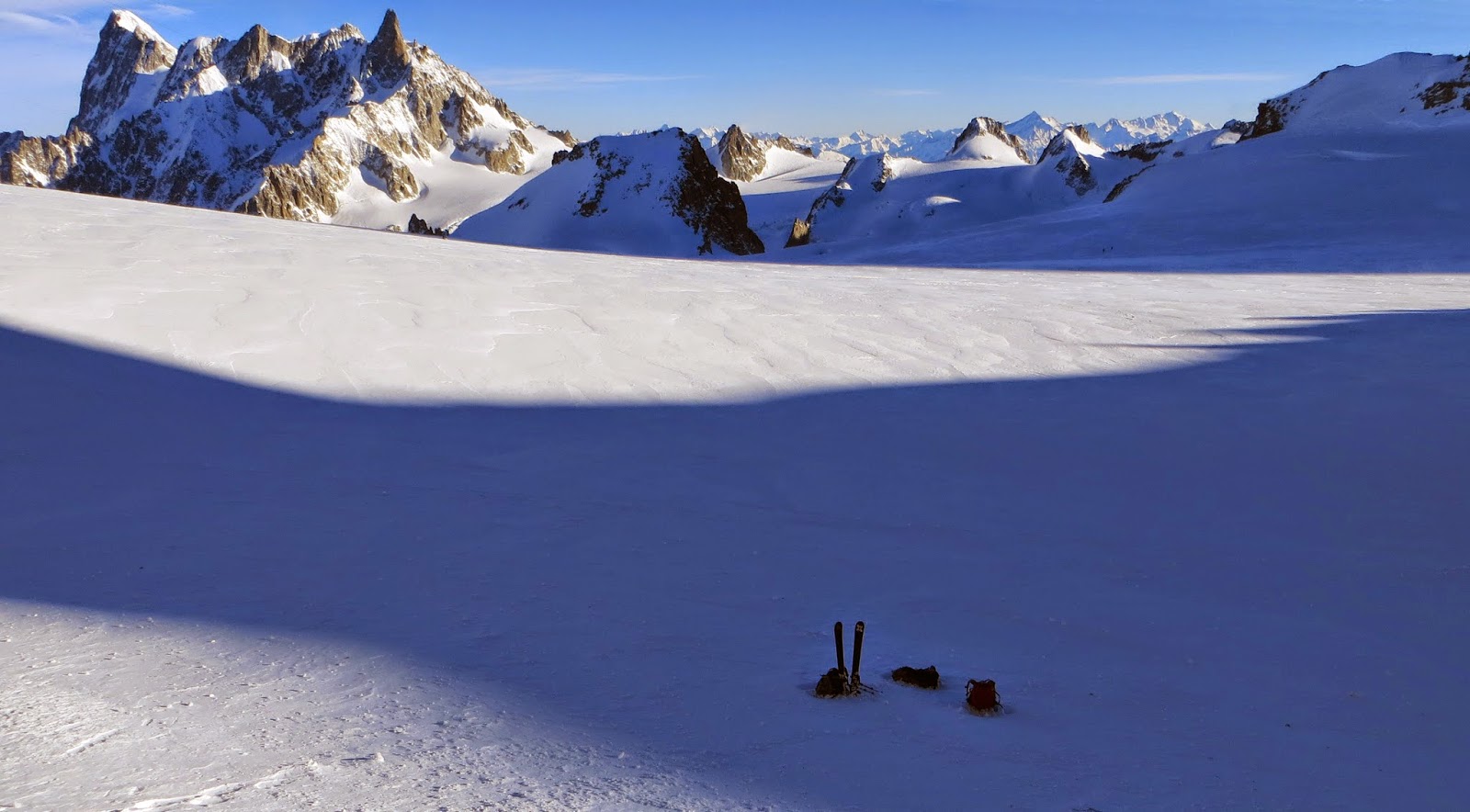 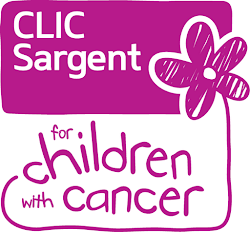 Donate to my Clic Sargent Fund!

emily roo
As a british female alpinist I absolutely love mixed climbing (and bouldering)! Although those of you who know me will also know of my love, or rather hatred, of running. And walking. And lightweight camping in the rain... So naturally, signing up to do the OMM in 2012 seemed like an amazing idea. In order to make sure I manned up and actually completed it I decided to raise some cash for Clic Sargent. I somehow smashed my target of £500 and raised £768. Clic Sargent is an amazing charity that provides emotional, practical and financial support for children and young people with cancer.

Every year just 25 British women under the age of 25 are diagnosed with breast cancer and in 2010 I was one of them. Not exactly what I had planned for my life at the age of 22 but my friends and general stubbornness kept me climbing and cycling throughout treatment.

In 2012 I learnt how to run, in 2013 I've learnt how to ski. As a Macmillan grant bought my first pair of ski boots, a skiing challenge would be quite appropriate!

You can donate and stay up to date with my fundraising here : Emily Roo's Fund